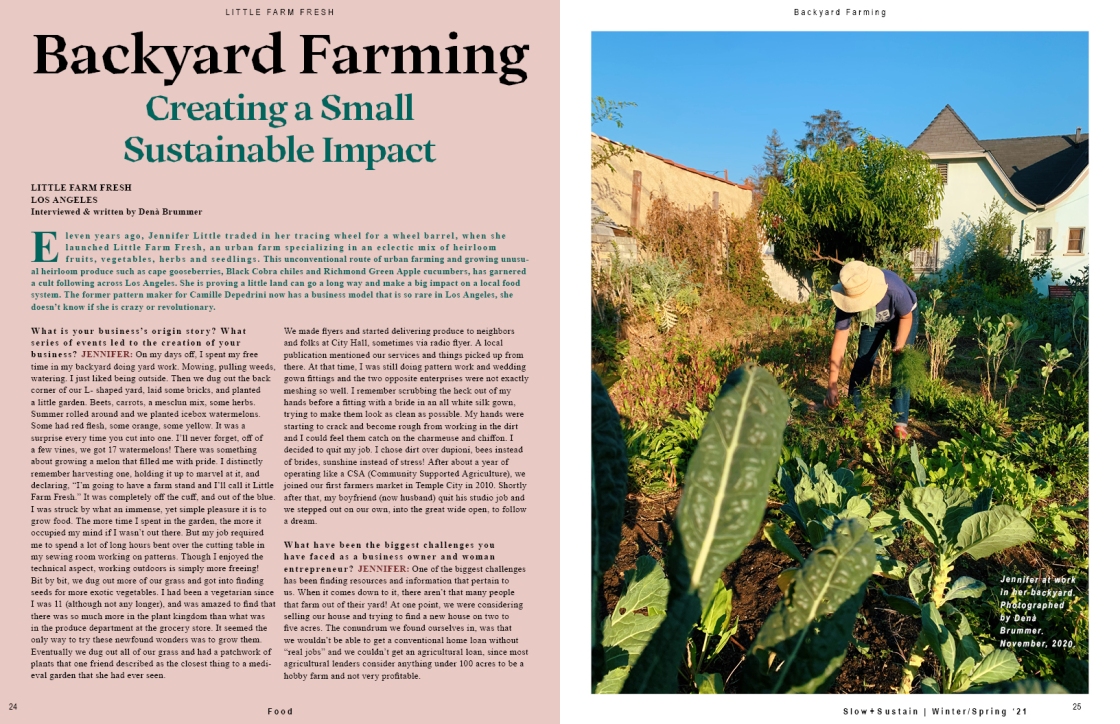 Eleven years ago, Jennifer Little traded in her tracing wheel for a wheel barrel, when she launched Little Farm Fresh, an urban farm specializing in an eclectic mix of heirloom fruits, vegetables, herbs and seedlings. This unconventional route of urban farming and growing unusual heirloom produce such as cape gooseberries, Black Cobra chiles and Richmond Green Apple cucumbers, has garnered a cult following across Los Angeles. She is proving a little land can go a long way and make a big impact on a local food system. The former pattern maker for Camille Depedrini now has a business model that is so rare in Los Angeles, she doesn’t know if she is crazy or revolutionary.

What is your business’ origin story? What series of events led to the creation of your business? JENNIFER: On my days off, I spent my free time in my backyard doing yard work. Mowing, pulling weeds, watering. I just liked being outside. Then we dug out the back corner of our L-shaped yard, laid some bricks, and planted a little garden. Beets, carrots, a mesclun mix, some herbs. Summer rolled around and we planted icebox watermelons. Some had red flesh, some orange, some yellow. It was a surprise every time you cut into one. I’ll never forget, off of a few vines, we got 17 watermelons! There was something about growing a melon that filled me with pride. I distinctly remember harvesting one, holding it up to marvel at it, and declaring, “I’m going to have a farm stand and I’ll call it Little Farm Fresh.” It was completely off the cuff, and out of the blue. I was struck by what an immense, yet simple pleasure it is to grow food. The more time I spent in the garden, the more it occupied my mind if I wasn’t out there. But my job required me to spend a lot of long hours bent over the cutting table in my sewing room working on patterns. Though I enjoyed the technical aspect, working outdoors is simply more freeing!

Bit by bit, we dug out more of our grass and got into finding seeds for more exotic vegetables. I had been a vegetarian since I was 11 (although not any longer), and was amazed to find that there was so much more in the plant kingdom than what was in the produce department at the grocery store. It seemed the only way to try these newfound wonders was to grow them. Eventually we dug out all of our grass and had a patchwork of plants that one friend described as the closest thing to a medieval garden that she had ever seen.

We made flyers and started delivering produce to neighbors and folks at City Hall, sometimes via radio flyer. A local publication mentioned our services and things picked up from there. At that time, I was still doing pattern work and wedding gown fittings and the two opposite enterprises were not exactly meshing so well. I remember scrubbing the heck out of my hands before a fitting with a bride in an all white silk gown, trying to make them look as clean as possible. My hands were starting to crack and become rough from working in the dirt and I could feel them catch on the charmeuse and chiffon. I decided to quit my job. I chose dirt over dupioni, bees instead of brides, sunshine instead of stress! After about a year of operating like a CSA (Community Supported Agriculture), we joined our first farmers market in Temple City in 2010. Shortly after that, my boyfriend (now husband) quit his studio job and we stepped out on our own, into the great wide open, to follow a dream.

What have been the biggest challenges you have faced as a business owner and woman entrepreneur? JENNIFER: One of the biggest challenges has been finding resources and information that pertain to us. When it comes down to it, there aren’t that many people that farm out of their yard! At one point, we were considering selling our house and trying to find a new house on two to five acres. The conundrum we found ourselves in, was that we wouldn’t be able to get a conventional home loan without “real jobs” and we couldn’t get an agricultural loan, since most agricultural lenders consider anything under 100 acres to be a hobby farm and not very profitable.

About a year ago, I was approached with the prospect of taking over operations of a 50-acre farm that belonged to an older couple ready to retire. We talked at length for months. All of the details about water rights, soil types on the farm, irrigation, infrastructure, equipment, marketing, profit and loss statements, etc. This would have been a big move for my family, and we were really excited. Everything was going well; on track. Then they met my kids.

It’s one thing to tell someone you have two little boys, and another thing to see them live and in action! The following weekend when I went back up to the farm by myself, they started to backpedal. One reason they gave was that I have two kids that I intended to homeschool, and they weren’t sure that I could do all of those things. In that moment, I could almost see a faint glimmer of the girl I was before I had kids; when I walked alone and did whatever I wanted, when I could will myself to work until my back broke and be confident that my sheer determination would get the job done.

I’ve wanted kids all of my life. They are my greatest joy! I love them more than anything. I went down a path that was conducive to spending a lot of time with them. Working from home, growing produce. Yet, even with the unconventional career path I chose, when the opportunity to climb the proverbial ladder presented itself, I was met with the age-old paradox of raising children or having a career.

Businesses solve problems in the market space, what is the solution that your business is providing? JENNIFER: The gap that we fill in the marketplace is providing really fresh and truly locally grown produce to our customers. The produce we deliver is less than 24 hours out of the ground and comes from a maximum of 15 miles away. Another aspect I love is that we’ve teamed up with a couple of bakers and offer bread, cookies, and English muffins as well. Especially after the pandemic hit, the real value in having local food systems in place became painfully evident.

I’m also big on introducing people to wild plants — weeds — or often overlooked parts of plants. Weeds are an important resource that could serve modern agriculture well if they were embraced. They’re free crops, requiring very little water, no fertilizer, less labor, and are generally more nutritious than any intentional crops. Lately we’ve also been selling bean leaves. Legumes are very important for soil health. They perform nitrogen fixation. Whereas most crops take nitrogen from the soil, they give it back. By selling the leaves as well as the beans (fresh and dried), the crop becomes even more lucrative. What I’m trying to do is introduce people to a vegetable they’ve never had so they get a taste for it, and will then ask other farmers if they have bean leaves for sale. The overdosing of America’s farmland with nitrogen fertilizers is a big problem. Growing more legumes and wild plants (weeds) can be part of the solution. Even though we are small, we can still incubate ideas.

In the grand scheme of all the environmental issues we are facing today, how do you feel your company is making a change in the world? JENNIFER: There are a lot of environmental and humanitarian evils that come along with the modern agricultural system. We offer an alternative to conventionally grown produce and are in close proximity to all of our customers. We have a different style of growing food, that isn’t farming or gardening really. It’s a relationship with the land. We don’t use synthetic fertilizers, pesticides, herbicides, fungicides, or anything else that ends in the suffix of death. We dig holes and bury kitchen scraps and garden waste, toss seeds around and let them find their own way. Leave the weeds to be, focus on perennials and rely on legumes. We aren’t solely profit driven and motivated by high yields.

We take care of our speck of land and make use of whatever it gives us. We’re part of a growing movement of small producers that are slowly creating a shift away from big business. A lot of people don’t want a cabbage that was grown in a field with 100,000 other cabbages, doused in chemicals and picked by people that are being mistreated. We don’t want food that starts in a laboratory and ends in a factory. We need to establish more local food systems producing food on a small scale, by people that enjoy the art and craft, and have their heads and hearts in the right place.

In the wake of the current global pandemic, how is your company navigating these unpredictable times? JENNIFER: The Beverly Hills Farmers Market that we were selling at shut down in February and didn’t reopen until June. After the shutdown, we switched to a “no contact” delivery system. At first, we were extremely busy when everyone was clamoring for food deliveries. It’s leveled off some now. Even though our market has reopened, we still feel the delivery system is safer for us and it accommodates our customers that feel the same way as well.

What else do you have in the pipeline for 2021? JENNIFER: I am loosely working on a book. More in terms of conceptualizing and gathering anecdotes, recipes, stories, and ideas. Other than that, I would like to add more fruit trees to our property and continue to grow right along with the plants.