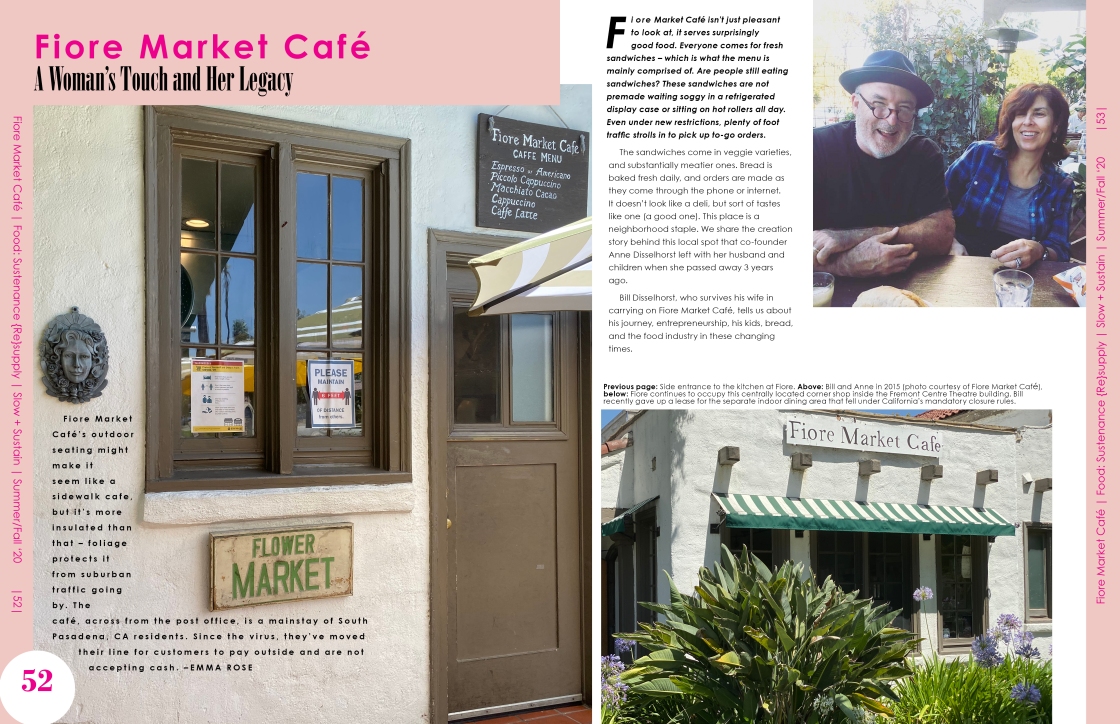 A Woman’s Touch and Her Legacy

Fiore Market Café isn’t just pleasant to look at, it serves surprisingly good food. Everyone comes for fresh sandwiches – which is what the menu is mainly comprised of. Are people still eating sandwiches? These sandwiches are not premade waiting soggy in a refrigerated display case or sitting on hot rollers all day. Even under new restrictions, plenty of foot traffic strolls in to pick up to-go orders.

The sandwiches come in veggie varieties, and substantially meatier ones. Bread is baked fresh daily, and orders are made as they come through the phone or internet. It doesn’t look like a deli, but sort of tastes like one (a good one). This place is a neighborhood staple. We share the creation story behind this local spot that co-founder Anne Disselhorst left with her husband and children when she passed away 3 years ago.

Bill Disselhorst, who survives his wife in carrying on Fiore Market Café, tells us about his journey, entrepreneurship, his kids, bread, and the food industry in these changing times.

Zine: You worked in the restaurant business since you were 15 years old, and even met your wife in the industry. This spot is in a prime location with a great atmosphere. What made you open your shop?

Bill: My wife’s name is Anne. I don’t know if you know this but 3 years ago this month, she passed away. She and I created the whole concept. You can’t see inside because that area is closed to the public right now, but when you look around the café, it’s from her vision, not mine.

The two of us did this whole thing, and she never even wanted to have a restaurant. She didn’t want the financial debt of owning her own restaurant, but in 2010, I lost my job and she came to me and said, “Do you want to open our own restaurant?” and that’s what this comes from – my losing a job and then her saying “Let’s do something,” which is when we created this. It’s a creation by the two of us, you know. Most of the visual aspects are from her, and the food is from the both of us. That’s basically how I started.

Zine: Where is your food inspired from?

Bill: In 2003, we went to Italy for the first time. Anne and I, and our two boys. We all fell in love with Italy, but I fell in love with Italy more than the rest of them. We ended up buying an apartment in Italy and had this whole Italian adventure, although we never lived there. I went frequently, and we went often as a family too. We were totally influenced by Italian culture and food.

My wife was influenced by French design, so a lot of “the look” comes from French things. French fabrics, French stamps, and so on. We were inspired by both, but the actual concept was really inspired by the way Italians would sit down and eat. So our whole plan was for people to come in, sit down, and eat off a real plate. I was really against the idea of to-go’s when we opened, because in Italy, you could never get a to-go. Now you can, but you used to go and sit, and you’d take as long as you want to eat. We were strongly influenced by Europe.

Process and the Philosophy of Today

When people came here, it was as much for the atmosphere as the food. That’s what we wanted. We have no Wi-Fi, so there are no distractions. People come and they communicate with each other. It’s not like the loud places where you go in to eat and you sit down and fill yourself, but then you’re also on your computer working. So the atmosphere was really important to us.

When COVID started, everything changed. Until recently, there were no tables. You could come and pick up to-go, but there was no sitting down. And then about 6 or 7 weeks ago, we were allowed to put the tables out again. But even now, I would say that only 20% of the people sit down and eat. Most people take their food home.

Zine: Tell us more about your bread-making process. Do you make the bread every day?

Bill: The thing that’s interesting about the bread is that people always compliment me. They compliment me all the time about everything – and it’s not me! It’s a group of people. When my wife and I started, it was her, me and a couple of people. She and I did the majority of the work. Now, I have a big crew, and they do the majority of the work. I only do very little.

Zine: How big is your team and what is your process?

Bill: Well, we’ve got 15 employees but when we decided on this concept, the whole idea was that we make bread for today. The bread is never used any other day. It’s only used today. So if there are loaves left at the end of the night, we give them away. We don’t use them. We don’t even keep them in the restaurant after that day. Sometimes they go in the trash, to be honest with you. We try to give people the bread, for free, at the end of the night. Next morning, we start all over. So every sandwich that comes out is on today’s bread. Whereas a lot of restaurants, they say they’re serving fresh bread, if they are… (sighs) most of the time, people are afraid of costs. If they buy a loaf of bread from someone to use in a restaurant, and it costs them whatever, say, $3 or $4, then they don’t want to throw it away. The next day, if it’s not so fresh, they’ll use that loaf. I won’t do that.

It costs me very little to make that loaf. If I lose it, I don’t lose anything. That’s the benefit of my business. Even really nice restaurants, because they’re spending so much money to buy that bread – they’re afraid to lose it. That’s what happens when you get a lousy sandwich, because somebody is controlled by costs. And I worked for corporations that only had cost on their minds. All they cared about were costs.

Zine: We’re almost afraid to tell people about you, because if you get flooded with traffic, where will your neighbors go for sandwiches when you run out?!

Bill: Well, you see, that’s already happened. People used to say that all the time, but December is 10 years for us. First 2 years, we had no business. Almost zero, because nobody knew we were here. It took us a long time to get going, and now it’s a normal flow [of traffic].

Zine: How did you find this space?

Bill: There’s a little place across from the Metro, an Indian restaurant. I was trying to get that place with him [the tenant], but they chose him over me. So I kept walking the neighborhood, and I saw this building was vacant. I was impressed with the entryway and the little canopies above the windows. It looked so European to me. I said to my wife, “This is the space.” Then I started talking to the landlord, and it took a long time for us to come to an agreement, but I just knew this was the right space.

Zine: Is your immediate family still involved in this business?

Bill: My youngest son works for me. He’s been with us since he got out of high school. He’s worked for us 8 years. My older son is in New York, he worked here while he was in college but he’s not a food guy so he didn’t want to keep working in the food business. He’s an art and literature guy, and he’s super content there.

Zine: What on your menu do you recommend?

Bill: The chicken is number one by a long shot. Here’s chicken (gestures height) and everything else is [down] here (gestures below).

Zine:What do people graduate to, after the first menu item they try?

Bill: A lot of people don’t graduate. A lot of people eat the same thing every day, for years. The roast beef is good, it’s cooked really rare. And the pork belly, but my supplier is out – that’s why I don’t have it right now. The pork belly sandwich is really good – we serve it with fig jam and arugula on homemade bread.

Bill: The veggie chopped salad is very popular, we have a tempeh bacon sandwich, which is vegan. We have [vegetarian] sandwiches, but we have entrée salads too. It’s interesting because we sell a ton of salads.

Zine: What kind of bread is it that you make?

Bill: It has yeast, though it’s not sourdough. It’s rising for about 20 hours. Since it rises for so long, it gets lots of flavor.

Zine: Is it your own concoction, or is it something traditional?

Bill: I stole the recipe from a guy called Jim Lahey who wrote a book (the “No-Knead Bread” book)! Basically, his idea was to make this bread that you don’t have to knead, and you let it rise for a very long time. I took his recipe and I adapted it to work for me. So it’s not my recipe, I never claimed that it is, but I changed things – to make it productive for me.

I have one dough recipe that I use to make the baguettes that I also use for little sandwiches (called “piccolo” sandwiches). It’s all from the same master dough recipe. If I make focaccia, which I do for specials sometimes, it’s from that same dough recipe. All different shapes [of bread], but the same base. 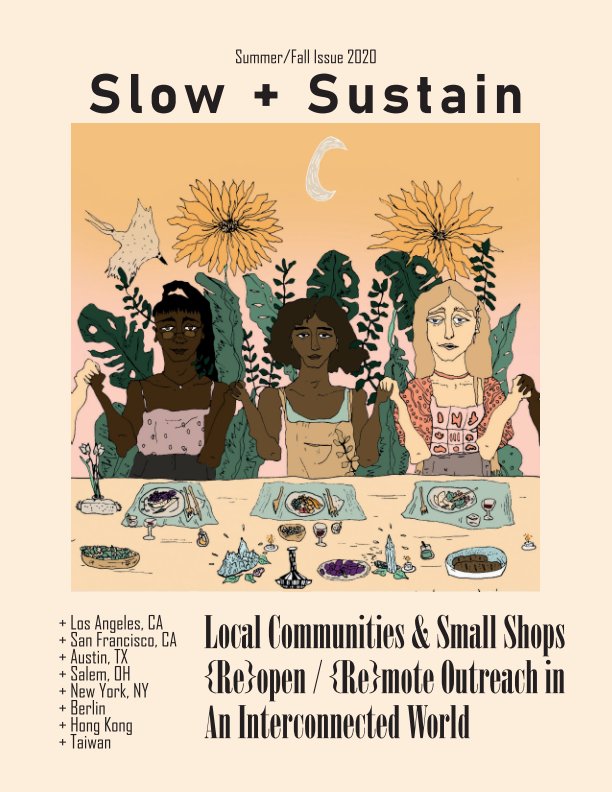